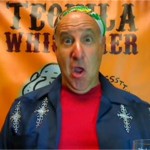 Every year for the past 6 (or 7?), the “Spirits Of Mexico” Festival is held in San Diego, Ca.  This year Th’ Lip was a Special Guest of the Fest’ and produced his FIRST On-Location “Tequila Whisperer Show” from a locale other than the mysterious Man-Cave!

Thrill to Lippy’s wily palate-prowess as he attempts to blind-rank the 3 top contenders in the 4 tequila categories (blanco, reposado, anejo, extra anejo) of the Festival’s agave spirits tasting competition.   How does Th’ Lip’s opinion match that of the 18 Judges?  Watch and see!

*Tech note* Audio is quite loud and the colors are quite VIVID in this first On-Location record of the “Whisperer” show – or have you ALREADY been drinking?

Kah (Lip calls as BEST IN CATEGORY and agrees with SOM Judges –finally-!)