Hi Gang! Your Tequila Whisperer has animated his first long form Google Doodle! Click above to play it (and don’t forget to watch hi-rez FULL SCREEN!)

Here is the story of how I got involved in the production and why it was such an important piece for me:

Since the dot com crash I, like many of my Flash animation contemporaries, have been content to reboot my career to a trade less concerned with storytelling and more concerned with making online game characters perform repeatable incremental actions.  It’s a fine living, but the urge to tell a story, even a simple one, is what drives most animators to continue to create. I have always been humbled by watching my fellow animators working insane hours on their own time to try and squeeze a few more ”story beats” into the opening cutscenes of the game they’re working on.  I’ve done it myself many times.  It’s the creamy center of any game production job: designing/storyboarding/(and if you’re lucky) animating the intro sequence: a mini-movie for all of 20 seconds.  Unlike the dot com glory days when animators had full time work telling stories for well-paying online patrons, these days working to create short pieces comes at a steep price: you must fund your animation independently out of your own pocket.  Then it’s up to you to market, advertise, and, against-all-odds, try to squeeze some money out of the whole endeavor.  It dissuades a lot of potential storytellers.

And yet hope springs eternal.  My call came on a Tuesday.

After a whirlwind of pre-production calls, on-campus meetings, and massive file transfers, I found myself working on Google’s first ever long-form animation: a Valentine’s Day “Google Doodle”!  I was working from the inspiring design paintings of Willie Real in the Doodle dept.  Willie has recently returned to the Bay Area from Blue Sky Studios feature animation studios in New York.  He has a great feel for story beats and honest emotion.  Animation is generally timed to a soundtrack, and for this piece, what a track we had: the legendary Tony Bennett crooning his 1951 version of the Hank Williams nugget, “Cold, Cold Heart”.  (Luckily I am a huge fan of both Williams and Bennett, which is good because I had to listen to that track more times that I can count).

So after all of the late night work sessions and early morning conference calls, my valentine is complete.  I’ll be taking my lovely wife out to dinner tonight to celebrate.  But I can’t help being surprised that in working on this project, I too was courted.  It was a sweetheart of a deal: I got paid to tell a story to the world again.

Many thanks to all of my friends on the Google Doodle team especially Ryan Germick & Willie Real.

This is Willie’s original storyboard drawing: 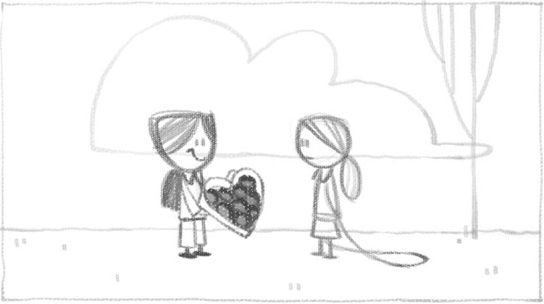 .. and this is my final frame layout for the animation: 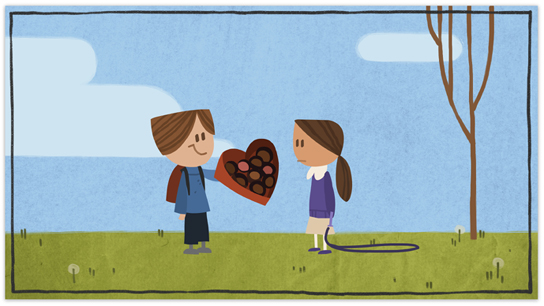 To see more of Th’ Lip’s animation go to LIPPY.com!